Its been a while since I posted my last poll, but here I am again with the next one. 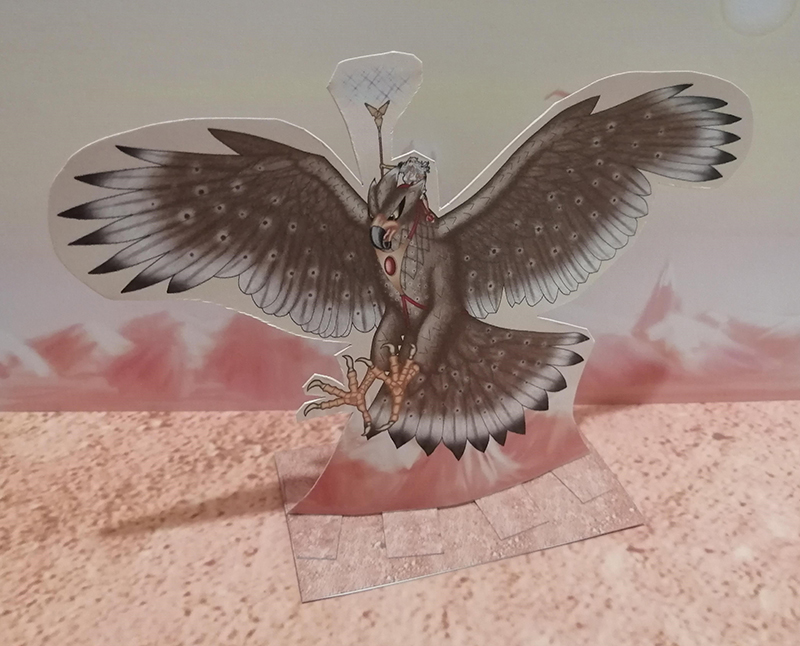 It was only about one or two weeks ago since I finished the Imperial Roc model shown above for the Elves and now I am ready to start working on this next one. However… and this is totally my fault, but I don’t have a model to work on while running this poll. So I am going to start working on the Men of Crack and Corn upgrade since they were the joint winners of the last poll I held.

Here are the voting rules:

Here are some more details on the models you will be voting on:

Updating the Orc Chariots pulled Horses to Zags instead 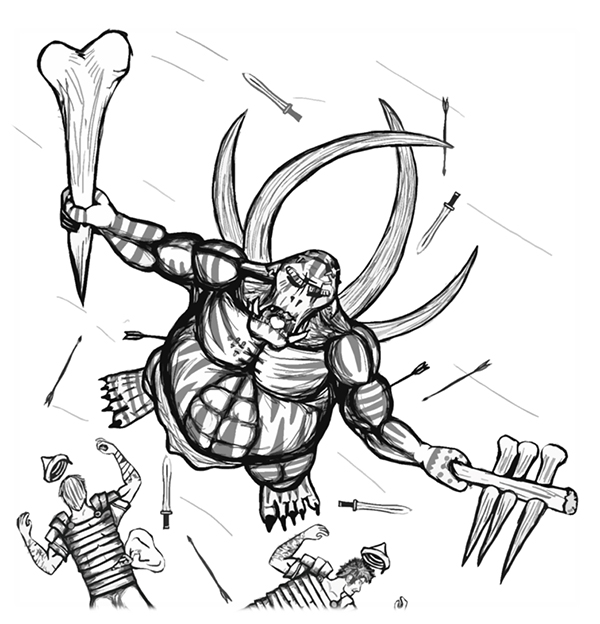 Maybe in every hundred grunts birthed, a handful of Blue Orcs are born within that batch. So, Blue Bulls are incredibly rare, but these monstrous anomalies do happen from time to time.

When Blue Orc Bulls reach adulthood they are nearly identical to their Green Brothers, but just like the rest of their kind are totally immune to magic and insane.

These blue monsters are huge, standing at nine to eleven foot high. They are so strong that they have been known to pick up sizable men, one man in each hand and use them as clubs to beat their enemy’s with.

Blue Orc Bulls are so scatty and mad, that their green brothers call them ‘Nutters’ when they fight alongside them in battle, which is one of the rare times they see that side of the family.

These rambunctious monsters rule under their Blue Queens, the Hags, on the boarders of their caravan.

Blue Bulls are quite capable of knocking all of their little brothers into line if they need too, but for some reason Blue Orcs tend to be less violent to each other than Green Orcs are.

Whatever the reason, amongst all the loud chaos in the Blue Orcs’ camp, they all appear to get on and seem happy with their lot in life, despite all being outcasts.

This undead infantry would have Light Amour and be armed with a number of different weapons, such as Swords and Shield and Spears etc.

I would like to look at creating Skeleton Cavalry or at least make a start on them.

I would most likely work on a light cavalry unit and then use that as my base to build up more elite units from in the future. It would just be a case of adding different weapons and armour to convert it into a different unit. For instance, adding more armour and a lance would turn the unit into an elite undead heavy cavalry unit.

The Imperial High Mage and Imperial Magic Handmaiden will be two models in one, but I will as include all their mounts upon their model sheet, baring in my I have just finished their Elf Mage mounted on a Roc model. 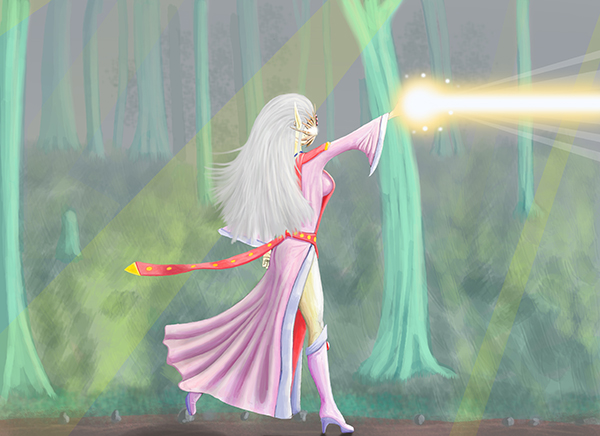 Imperial High Mage / Imperial Magic Handmaiden 3rd generation female Elves will either become Hand Maidens’ to their Princess Priestess Mothers or study under them to become a High Mage. However, all are expected to become mothers to the next generation of Elves. High Elf Mages are thought of as the working wizards in the Empire. These powerful Mages are constantly at work, only resting to do their bit like a female for the Empire. If they are not at court they will be casting magic for industrial or agricultural assignments. At other times they can be found high up within their towers, studding spells, mixing powerful potions or writing magical scrolls for their Sorceress Mothers. High Elf Mages also lend their arcane abilities to the Golden Empire’s military, where they can be found on the battlefield casting fairly complex and powerful spells at the enemy and defending against their magic. Even though a High Elf Mage is overshadowed by their Sorceress Mothers magical abilities, they still have considerable skills in the arcane arts, which most wizards outside the Empire would be envious of. Unlike their mother’s, High Elf Mages do not generate enough raw magical energy to create a shroud of magical protection around them. Instead, their will focus all of their considerable power into casting powerful spells at the enemy, and ride a steed or beast into battle and heavily rely upon them for their defence. Despite their mediocre status within imperial society, High Mages are not to be underestimated in battle. They are equal to all the other great mortal wizards outside the Empire and have even been known to lead small attachments of soldiers to victory in skirmishes. 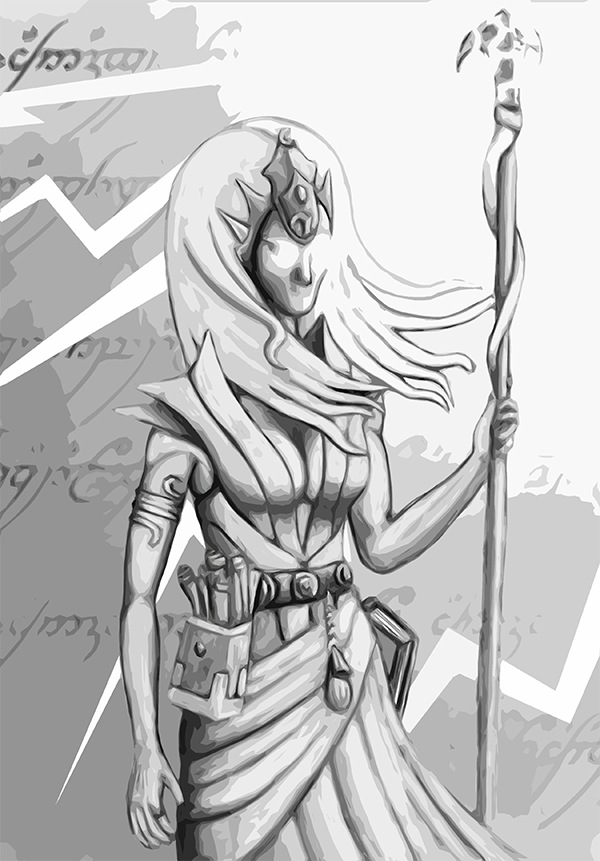 Under the Imperial High Mages, serve their Magic Hand Maidens, who are usually their own daughters. They are competent magic casters but lack the power of their mothers. That said, some have impressed their betters so much that they have served under Princesses or even the Empress herself. Imperial Magic Hand Maidens are the last in the line of magic casters the Empire will allow serving as wizards. The tint of corruption in their blood becomes too great within later generations of Elves for them to become effective spellcasters of any use to the Golden Empire. On the battlefield, Magic Handmaidens usually accompany small attachments of warriors, bravely serving as the group’s main wizard. In bigger battles they will directly aid and support mages by casting low levels spells to keep their enemies off balance or help their masters to combat their spells.

The Huntsmen will be a cheap and for Humans on foot, a fairly fast skirmishing Bow Unit for House Gorren.

Their main role on the battlefield will be to provide mobile light archery cover for their army’s main force and pick off weak and vulnerable enemy units.

They will be lightly armed with Poisoned Bows and Hunting Knives. They will have the option to wear Light Armour and to carry Warnets, which will help them hunt down creatures with high agility.

As the Huntsmen are used to tracking down and killing whatever lurks in House Gorren’s forests, their relatively low Soldiering of 3 will be somewhat improved by their +2 Bravery.